A question of the right photo 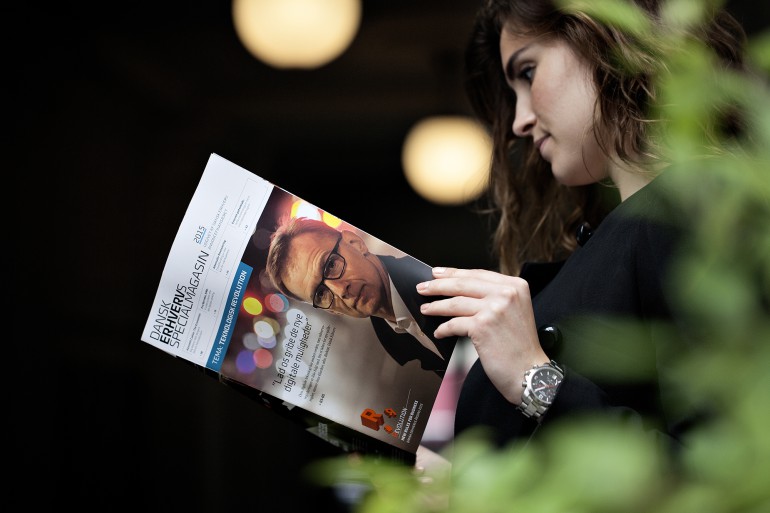 Putting together a magazine such as the the Danish Chamber of Commerce special magazine is a challenging task. There are many factors you have to bear in mind if you want to give readers a good experience. One of the most important factors is the work in creating exactly the right photos.

By Lars Bo Axelholm, editor of the Danish Chamber of Commerce annual magazine 2015

There are many factors that must be taken into account when planning and producing a delightful magazine. Of course, the stories need to be current, interesting and well-written. There should be short, quick stories, and articles that are a little longer, where there is the chance to go deeper into a particularly important issue. But one of the most important conditions that there must be 100% control over is the choice of the right photos.

It is said that a picture tells a thousand words. Whether there is any scientific evidence for this saying, I personally doubt, but there can be no doubt that powerful and immediate pictures are an absolute must if we want to create a first-class magazine.

After all, in the first place it is the picture that captures our attention. Is the picture interesting? Is it a person or a situation that causes us to pauses as we browse through the magazine? It is only when the picture has caught our attention that as readers we continue to read the headline and the article itself.

And this is precisely the printed magazine’s great strength, here there is the chance to give the reader a surprise. Pictures in print – maybe spread over a double magazine page – provide a completely different reader experience than the pictures we are used to seeing when we read our news online. To put it in a few words: Powerful pictures are the magazine’s great strength.

At First Purple we draw on some of the country’s best photographers when taking photos for the magazines, and of course this was also the case with the Danish Chamber of Commerce special magazine.

Photographers Lars Just and Ulrik Jantzen both have a solid reputation for providing first-class photos when they are sent on an assignment.

It is natural that in magazines such as the Danish Chamber of Commerce special magazine it is often sources from the Danish business community who will be giving their opinions. This means that we interview executives, researchers and others who typically work in an office. And this gives the photographers something of a challenge when they need to take an exciting picture to accompany the article. For to be honest, a picture of an executive against the wall of a house is not the most exciting eye-catcher.

At First Purple we spend a lot of time in the production process discussing how the photographer can get the best pictures from a photo assignment. Preparation is incredibly important as there is rarely time for much experimentation on the job.

Naturally, our sources are busy people who are not able to take an entire day off to take part in a photo session. Often there is only 30 minutes to an hour available and this naturally presents the photographer with a challenge: how do you get an exciting shot of a director which arouses our curiosity when you also have very little time available? So it is crucial that the photographer and editor have discussed beforehand what the story is about, who they should take pictures of, what options the location may offer and of course how the picture can underpin the story.

Director Eva Berneke from KMD is a very important source for the magazine’s story, but also a very busy person, so photographer Ulrik Jantzen only had a little time to create an exciting image that would present Eva Berneke in the best possible way. At the same time, as editor I wanted the image to stand out a little, so that it is not just ‘another’ portrait of a director. And this is just what talented photographers such as Ulrik Jantzen can do. Of course I will leave it up to the reader to judge the result, which can be seen on pages 16-17 of the magazine.

Photographer Lars Just also has a special talent to think outside the box and shoot creative solutions. We have several examples of this in the magazine.

For the story about Robocat, which had positive experiences with crowd-funding, we needed some good photos of the director Willy Wu, who is interviewed in the magazine. But Robocat’s office is just as photogenic as many other offices: That is, creative people working in front of their computers. It is not the most exciting thing to take a photo of. So we chose to photograph Willy Wu among crowds of people on Købmagergade in Copenhagen. See the photo on page 27. The idea was that the crowd of people around the director should symbolize the “crowd” who are helping to finance Robocat’s success. Some people might think that it is a little trite, but nonetheless, Lars Just created a dazzling portrait.

A very good example illustrating that the director does not need to appear in the picture in a crisp suit and blue tie is the photo of CEO Mikkel Holm Sorensen from the consultancy /KLUX. The picture can be seen on pages 12-13 of the magazine.

Beforehand the assignment was a bit of a puzzle for the editors. For concepts such as Big Data and data analysis are not exactly the things that create the greatest ideas for interesting photos. But by allowing the CEO to ‘play’ by a big fence at the metro construction on Kg. Nytorv, we got exactly the different kind of photo that helps to lift both the article and the magazine up into the super league.