Reflections of an editor after the storm 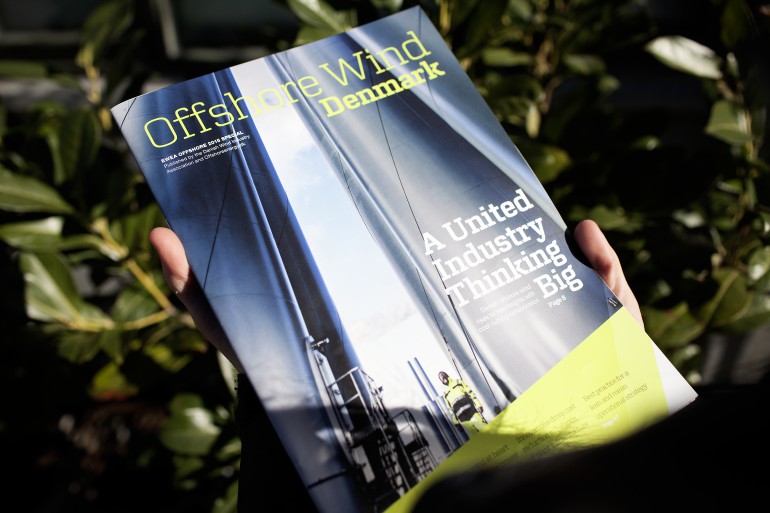 The project brief demanded a magazine that would meet two primary goals. It was to serve as an impressive international showcase for the Danish offshore wind industry, with a shelf-life to the end of 2015. And it was to inspire politicians with success stories of how a broad industry collaboration was reducing the cost of offshore wind power. As editor I mentally added a third goal. To achieve those aims, the magazine would first have to attract and engage the intended audience. What was needed was well targeted content that pressed the right buttons in party-political circles, yet written in a way that would interest and inform a sophisticated international wind industry audience. Great visual presentation would heighten the chances of the words being read. Nothing less than truly journalistic editorial, attractively packaged in a well tried mix of story-telling, interviews and factual reporting, would do the job. Maintenance of the magazine’s integrity, however, would require vigilant elimination of any hint of lobbying bias, including the removal of sound bites fashioned by the industry’s public relations professionals. I anticipated heated arguments ahead and frequent use of my best persuasive skills. As it turned out, First Purple and the two Danish wind industry organisations commissioning the magazine needed little persuasion. Planning meetings well ahead of production allowed us to learn to trust one another. By establishing early ground rules we cut the risk of last minute snap decisions that are so often detrimental to quality. Development of a detailed content plan that meets the client’s approval is a testing task for any editor of a commissioned publication. My focus was on what’s new, what are the latest challenges, and what solutions can the industry offer. Striking the right balance between the wishes of two separate clients and the editor’s journalistic instincts, finding common ground and agreeing on what not to include all takes time. Even when a plan is agreed, flexibility is essential. Clients that trust the editor to change the editorial to fit changing circumstances make possible the art of the impossible and facilitate cutting-edge content. As editor I liaised closely with First Purple to create and steer a team of writers, photographers and production professionals, working from four countries on two continents, before forging the resulting text, images and design into a cohesive whole that at each stage won the clients’ approval. Few of the team members actually met one another in person, but sound editorial control meant that a strong team spirit prevailed nonetheless. By all accounts, Offshore Wind Denmark met the project brief and I’m proud to have been associated with the publication. Our clients even told us the magazine exceeded their expectations. Any doubts about the benefits of print over digital for achieving the project’s aims were dispelled by the end product, which quickly demonstrated its value, both for readers and advertisers. As a physical product the magazine has impact. Page by page it takes readers on a unique voyage through Denmark’s offshore wind seascape. Its widespread distribution, including at a major industry event in Copenhagen, means the publication will serve its purpose for months to come. That point was well proved when our graphic designer was handed a copy of the magazine along with his coffee when flying back to Esbjerg after the Copenhagen event. Several of his co-passengers were observed to be deeply engrossed in the story of Offshore Wind Denmark: A United Industry Thinking Big.   The good, the bad and the essential Best surprise (1): A superb working relationship with the clients in what were occasionally difficult and stressful circumstances. Best surprise (2): Very few meetings. Just two planning meetings and one production meeting with the graphic designer. (I’m excluding the celebratory team dinner hosted by First Purple after publication). Worst surprise: The occasion that our costly star photographer, cleared for a day’s photo shoot that was highly weather dependent, was refused site access on arrival at the industrial site. Biggest frustration: The refusal of public relations departments at companies who were the beneficiaries and backers of the publication to facilitate interviews with their senior officials. Last word: Keep a sense of humour at all times, no matter what transpires.