What you can learn from IKEA.. 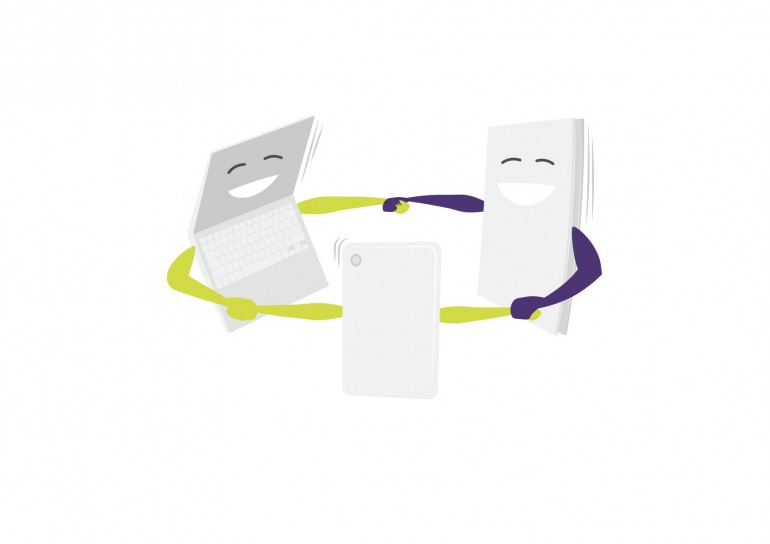 Although we spend more and more time on electronic media, the print media is also thriving. IKEA is taking new paths to add extra life to its world-famous catalogue. This may be something that you and your business might learn from.

The electronic media have revolutionized the way we all get our daily news. The weather forecast, the score in the FCK – Brøndby match and the recipe for chocolate cake are never further away than your smartphone.

But especially when it comes to advertising, the print media still plays a central role.

A study by Adobe* recently showed that twice as much of the advertising budget was used on print than on mobile platforms.

In our last newsletter we struck a blow for the power of absorption, which is one of the print medium’s greatest strengths, while this time we would like to look more closely at the widespread belief that the media will completely replace each other as if it were a natural evolutionary process.  We do not believe this. On the contrary, it is all about interaction.

The media must adapt to a new reality. There can be no doubt about this. But even though the time we spend on digital platforms is growing, this is far from being reflected in companies’ allocation of their advertising budgets.

– Print is still a central media, insists Rasmus Kleis Nielsen, who researches the development of the international news media.  Despite so many people rushing to say that digital is the only way forward, digitalis really only part of the way forward, he told DR.

The companies’ choice of marketing channels is a good example.

We all know IKEA for supplying Swedish meatballs, fun product names and assembly instructions that can put any relationship to the test. But whatever one thinks about its cheap self-assembly furniture, IKEA is a professional when it comes to marketing. And it is IKEA who is behind a sophisticated vision of how electronic media and print media can work together optimally.

Each year IKEA publishes a catalogue, which with a circulation of 212 million copies printed in 29 languages has achieved the status of being the world’s largest marketing activity.

For many years the well-known catalogue has been IKEA’s largest marketing tool, but in an attempt to create more digital interaction between the catalogue and the customer’s smartphone, the furniture giant has now given the catalogue a digital update, including the launch of an app.

The app makes the catalogue more vivid with 3D views of furniture, videos, and stories behind the furniture’s design. It requires a download, but IKEA believes that this is not a barrier.

– Nowadays people navigate between traditional and digital media. The modern consumer is comfortable with apps, and we have seen positive results for it in other countries. Apps also provide far more possibilities as a tool for inspiration in relation to what we would like in the catalogue rather than just using a QR code, says IKEA Denmark’s Head of Marketing Lena Gaarde.

The IKEA catalogue is an icon in the marketing world, and customers around the world love it. So it also makes sense that IKEA is not saying goodbye to the physical printed catalogue, but is instead aiming to gain from the synergy of connecting the print and electronic media.

The IKEA example is just for inspiration, but next time you have to make a marketing campaign, you can think about how your business can get electronic media and print media to work together in an optimal way.

*The study was based on 214 billion ad displays on Google and Yahoo! Bing, collected from Adobe Analytics and Adobe Media Optimizer from 2013 to 2015.